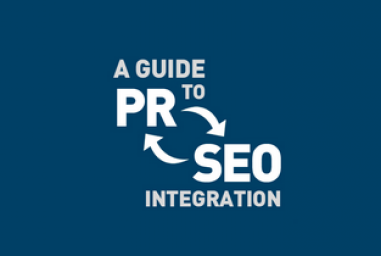 The Marketing Department of the Future

This article was written by Samuel Scott, a digital marketing and communications consultant. The original article was posted by Moz, one of the SEO research and analytics tools we use to optimize our clients' search engine visibility.

After leaving my journalism career and having studied marketing in an M.B.A. program in Boston, I moved to Israel some years ago to pursue a marcom career in the so-called "Startup Nation." My first job, however, turned out to be at a pornography website that broadcast live "shows" for $1 a minute.

Yeah, it's a little embarrassing. But I learned a lot – about what not to do.

"I'm sure the marketing department is handling that," he said. As I understood later, I was in the SEO department. I left that job quickly. (Actually, I was doing "black-hat SEO" – in other words, spam. Of course, real SEO – "white-hat SEO" – is something entirely different. But more on that below.)

In large corporations and similar companies that have been in existence for decades, digital marketing is often added as a second parallel structure alongside the historical marketing activities. The incorrect assumption is that traditional and Internet marketing are entirely different things that need entirely separate approaches. My basic example: 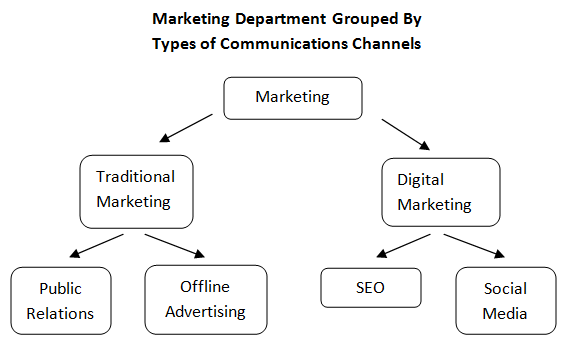 But such a structure can lead to major problems.

At a prior agency, we had a client who hired us for both public relations and organic social media (in addition to paid social-media advertising and conversion-rate optimization). The goal of the PR team was to get coverage of the business and its executives in major, relevant publications. The goals of the Social Media team were to generate qualified sales leads and build a large Twitter following.

However, due to the flawed decision to separate PR and social media, the extremely-large number of good Twitter followers did not come despite the company's gaining of major coverage from outlets including Fox News, The New York Times, Forbes, Wired, and AdWeek.

Why? The PR team did not concern itself with social media, and the Social Media team did not think about public relations. There were many missed opportunities:

Now, it was not the PR team's fault – I can attest that they were intelligent, professional people. It was just not how the agency's operations were structured as a whole. The PR team did not think about anything relating to social media because it was the Social Media team's responsibility – and vice versa.

In a personal essay on my website, I explain how to get more good Twitter followers. First, use Followerwonk to find relevant journalists, bloggers, and influencers based on your target audience and strategic messaging and positioning. Then, incorporate Twitter naturally into your PR and publicity activities. There are no "tricks" to gaining large followings. The key to being big on social media is to become something big in the first place. The online and offline worlds reflect each other. (Rare viral cases such as "Alex From Target" are exceptions that prove the rule – "going viral" is too-rarely successful enough ever to be a solid strategy in and of itself.)

Don't Create Too Many Silos

In contrast to larger companies with long, vertical, and parallel structures, many small businesses and startups today are extremely horizontal and flat. According to 7Geese, companies such as Morning Star and Return Path have even taken it to an extreme by stating that "no one has a boss."

Here is another basic example of mine of how marketing departments in companies with flat philosophies are structured. Every single function is on the same level:

I once walked into the office of the CMO of an Israeli tech company that was building numerous products in various sectors. I was there to explore a consulting opportunity. Each product had an overall product marketing manager, and there were numerous, separate teams on a flat level that would each do "PR," "SEO," "social media," and more for each product.

Here are a few excerpts of my conversion with the CMO:

Me: What is the function of the SEO team?

CMO: To get more links.

Me: But the PR team will get the links you need naturally.

CMO: The SEO team will buy the links that we want the most. It's just easier and faster that way.

Me: So, you've got a PR team to reach out to journalists and bloggers?

Me: What if a writer is only reachable on Twitter – will the PR or Social Media team reach out to them?

Me: What will the Social Media team do?

CMO: Spread the word about the company's products on social media.

Me: How will they do that by themselves without content and without essentially doing PR's job?

I can hear countless Mozzers groaning while reading each quote! I did not take the consulting job – the CMO was committed to the old ways of thinking that do not work anymore, and I could not convince him otherwise.

How to Think About Marketing Functions 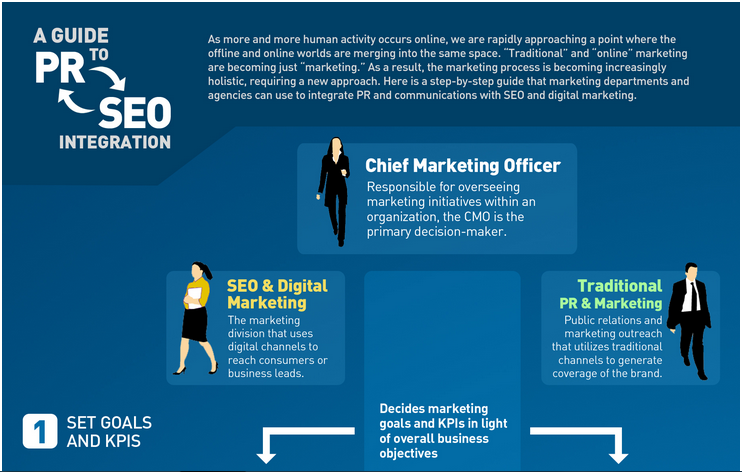 Important note: I know that I just said NOT to separate traditional and online marketing. In context, this earlier step-by-step infographic on how to integrate SEO and PR separated the two because the use of the differentiation was the easiest way to explain the integration process – it was not a recommendation to divide the teams themselves.

In that essay, I explained the traditional marketing and communications process in this way:

That same theoretical idea can be applied in an actionable way in terms of how to structure a marketing department, agency, or campaign. I describe the four-fold process as such: Strategy, Creative, Communications, and Audit.

In light of this idea, I argue that the operations of a marketing department should flow along these four lines and not divide traditional and digital channels because the Internet is just a set of new communications channels that can be used to execute overall marketing functions.

Here is a new flowchart that outlines this overall process: 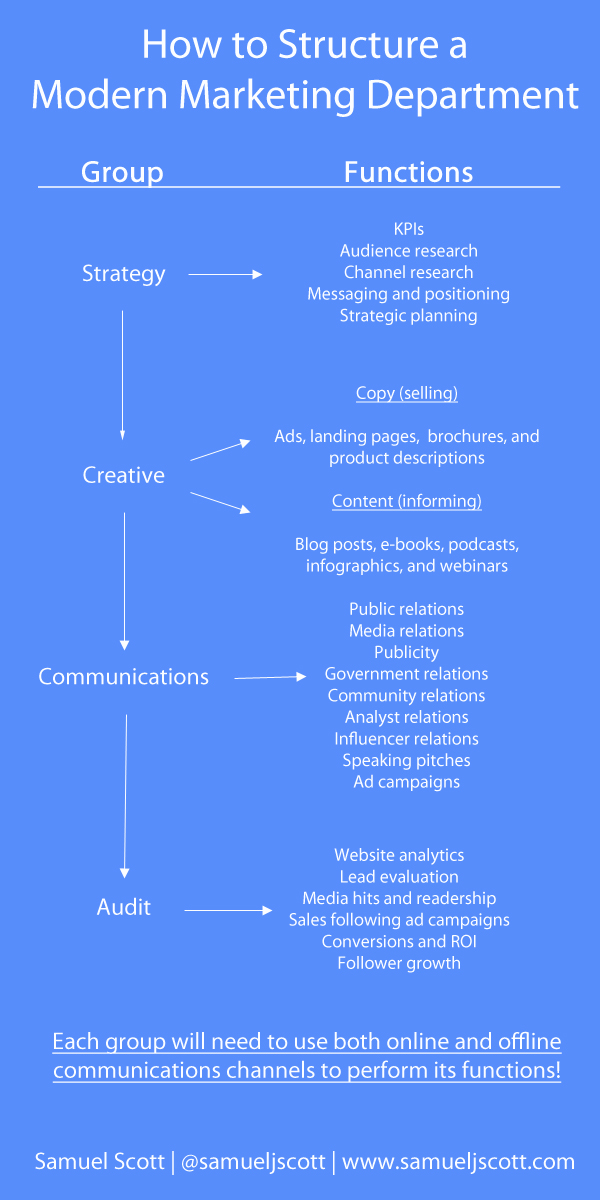 To read the rest of this article, click here. Please share your thoughts in the comments below!