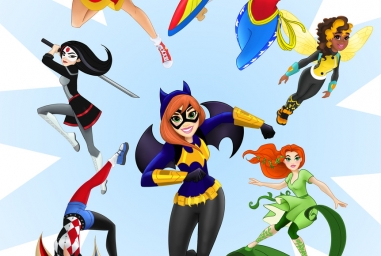 How DC Comics Did Female Demographics Justice For Lack of Empowerment

You can find new movie releases from Marvel (The Avengers) or DC Comics (Batman vs Superman) as well as current TV shows like The Flash or Daredevil from both respected comic giants.

The one thread that gives them similar quality? They target similar demographics for young males or older males.

In response to an overwhelming emphasis of males over females made viral by an 11-year-old girl named Rowan, DC Entertainment, Warner Bros. Animation & Consumer Products, along with Mattel announced to collaborate and launch DC Super Hero Girls for Fall 2015. The first segment will be in a digital interactive format while books and action figures will be available in 2016.

The new generation of kids growing up in this age of constant marketing (involving super heroes) means more widespread audiences but with selective tendencies.

While the old standard was usually set to market princesses for young girls, DC is capitalizing on the market demand for super heroes for girls exclusively which could have long-lasting results.

For starters, the introduction of female Thor in November 2014 made a splash for featuring a female character lead.  The female Thor comic books outsold Thor: God of Thunder comic books by about 30%.

DC hopes utilizing their female heroines in the teenage years and discovering their powers can foster a similar theme on growing up for girls ages 6-12. The DC Super Hero Girls feature popular characters such as Batgirl, Supergirl, and Woman Woman (as a teenager).