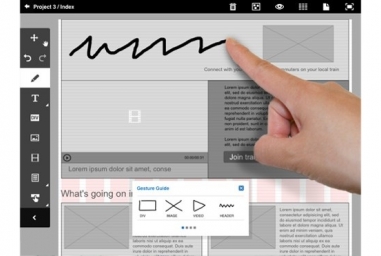 Starting March 30, 2015, an Adobe app called Adobe Comp will launch for free use on iPads. Creators using this can quickly layout mock up typefaces, graphics, and more.

Within the next calendar year, Adobe, spearheaded by Scott Belsky, hopes to evolve from stationary desktop work to a mobilized component for users. With websites and information relying on mobile devices, Adobe Comp’s conception may be the start of a mobile movement helping users mastering their craft on the go.

"We’re marketing this as the first-mile app for all of the desktop products," Belsky stated.  "When you open a new project in either Photoshop or Illustrator, it’s a blank page. It’s so freaking intimidating. Instead, you open Adobe Comp, and just start."

CFD sharing will be worked into another plan by Belsky for a project called 360 Degree Workflow. The purpose is to branch other creative apps into one suite. This allows one’s project to be integrated by deep links within the editing interface.

Belsky’s hopes will be riding on the user’s adaptation to manipulate different tools for one job with deep linking.

Rather than cramming Photoshop or Illustrator into its own app, Belsky says: "I think what eventually will happen is, third-party apps will want to be part of [Adobe’s] professional creative workflow on mobile.”

The user-friendliness for mobile meeting workplace inventory could be a dynamic change for all Adobe users alike.